Drowning to Breathe by A.L. Jackson 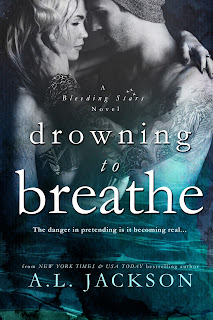 The danger in pretending is it becoming real...

Sebastian Stone, Sunder front man and guitarist with a rap sheet about ten miles long, escaped to Savannah, Georgia, to get away from the trouble he’d caused.
Not find more of it.
The moment he saw Shea Bentley, he saw beneath all her sweet and innocence to something that went deeper.
Darker.
Their relationship was built on secrets; their love built on lies.
Sebastian never imagined how deep her secrets went.
When the past and present collide, Sebastian and Shea find themselves fighting for a future neither believed they deserved. Their passion is consuming and their need unending.
Now, holding the truth in his hands, Sebastian is faced with sacrificing everything he’s come to love to protect Shea and his family.

Will their demons drown them or will Shea and Sebastian finally learn to breathe? 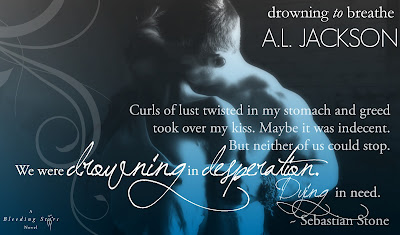 My brow pinched, because this fucking hurt. Hurt that Shea had been resisting confiding in me because of who I was. A fucking loose cannon. Someone prone to violence. And there it was, right beneath the surface, fire flaming and licking and begging for release.
My voice was tight. “Made you a promise I’d protect you, Shea. Live for you. And that’s exactly what I’m gonna do. You and Kallie? You’re my life. My everything. And I will do anything…give up anything…to make sure you two are together. I won’t let him win.”
She brushed the back of her hand over the wetness on her cheeks. “He will do anything to break us apart…to separate us. He knows we’re weaker alone. All his words about taking us down at the same time?”
Her head shook with bitterness and hate, something so foreign on my girl’s face, but I saw it there—the atrocities he’d committed—the things she still kept inside.
The scars she wore on her heart while I wore mine on my skin.
“It’s a tactic. A ploy. He thinks he can fill us with threats. Convince our subconscious into believing together we’re easy targets. But, no.” Her eyes drew together as she refuted the idea, as she spilled her own belief. “He’s a coward. A coward. Someone who allows others to carry out his crimes and then lords it over them as if he is the one exerting control.”
That brave chin quivered. “I gave him my submission for so long, and I refuse to ever be that girl again. I was her, Sebastian. I was weak.”
Strength filled the profession. “But I’m not weak anymore. And I’m even stronger with you by my side.”
Raw.
Bold.
Courageous.
“Promise me you won’t let him provoke you, Sebastian. He knows exactly how to ruin people. He finds their weaknesses. He knows Kallie is mine. And he knows the two of us are yours.”
I swallowed hard. “I promise, baby.”
I promise. 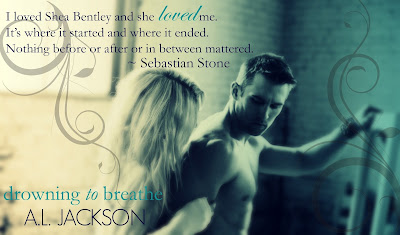 He wanted nothing at all…

Until he found she had everything to give…

Sunder lead singer and guitarist Sebastian Stone has everything—fans, fame, and fortune. He also has a heart full of bitterness and a reputation for a short-fused temper. But an outward reputation rarely reveals the true man inside. Facing assault charges after trying to protect his younger brother, Sebastian is sent to Savannah, Georgia to lie low until the dust settles in L.A.

Shea Bentley is beautiful, kind, and hiding from the very lifestyle Sebastian has always embraced.

When the mysterious, tattooed stranger begins hanging out at the bar where she works, Shea is quick to recognize he is nothing but trouble, but she's helpless to the way her body lights up every time his intense gray eyes tangle with hers.

They both soon find themselves drowning in a sea of desire and passion that won’t let them up for air.


Sebastian knows firsthand secrets never die, and he’s not the only one who’s hiding them.

Loving someone always comes with a price. But will it be Shea’s past that costs them everything?

She first found a love for writing during her days as a young mother and college
Posted by Unknown at 6:30 AM