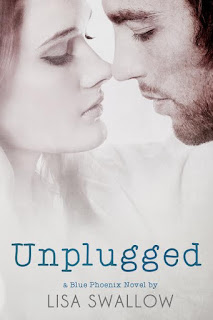 BUY LINKS FOR THE SERIES:
The entire BLUE PHOENIX series is on SALE for this week only! Summer Sky is FREE, and the other books are all .99¢ each!
These are available exclusively through Kindle Unlimited.

GIVEAWAY:
Win one of two swag packs or a $5 Amazon Gift Card. (3 winners)

Tegan Hughes joins Blue Phoenix and Ruby Riot on tour, and drummer Bryn isn’t the only one who notices his little sister isn’t a kid anymore.

Jax Lewis is the guitarist for Ruby Riot and the band are rising to success. He’s hot property and loving every minute of his new found fame. Now, he’s on tour supporting Blue Phoenix and living his rock star life to the full. Until Tegan walks into his world and puts the brakes on.

Tegan Hughes is taking a year out and has her sights set on touring Europe with her big brother’s band. Blue Phoenix drummer, Bryn isn’t happy when his sister arrives unannounced at his hotel in Lisbon, but Tegan isn’t the type of person to take no as an answer.

With her big brother breathing down their necks, Jax and Tegan attempt to keep a handle on their growing attraction but that proves harder than they thought. Jax is used to getting whoever and whatever he wants and after kissing Tegan once, he knows one thing…he wants more.

But Tegan isn’t rock star girlfriend material. She has ambitions of her own and refuses to let anything stand in the way of her plans. And when Jax and Tegan’s relationship becomes public knowledge life becomes a hell of a lot more complicated.

Ruby Riot is a spin-off from the Blue Phoenix books but the two series can be read separately. All the Ruby Riot books are standalone. 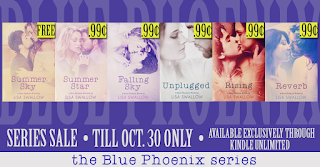 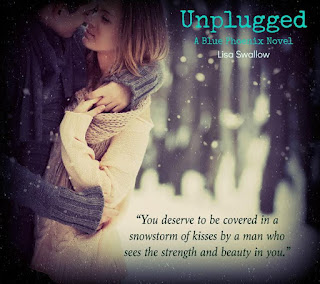 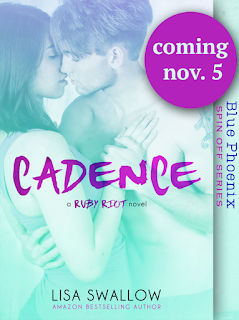 BIO:
Lisa is an Amazon bestselling author of contemporary and paranormal romance. She is originally from the UK and moved to Australia in 2001. She now lives in Perth, Western Australia with her husband, three children, and Weimaraner, Tilly, who often makes appearances on Lisa’s social media.
Lisa’s first publication was a moving poem about the rain, followed by a suspenseful story about shoes. Following these successes at nine years old there was a long gap in her writing career, until she published her first book in 2013.
In the past, Lisa worked as an English teacher in France, as an advertising copywriter in England, and ran her own business in Australia. Now she spends her days with imaginary rock stars.
She lived in Europe as a child and also travelled when she left university. This has given Lisa stories which would sound far-fetched if she wrote them down, and maybe one day she will. These days, Lisa is happy in her writing cave, under Tilly’s supervision.

The Amazon bestselling Blue Phoenix rock romance series is about a UK rock band. There are six books in the series, three interconnected feature lead singer Dylan and Sky and three standalones feature the other band members.

Check out the BIG SALE on the series. All books are available on Kindle Unlimited.

This is book three of the Blue Phoenix series. It can be read as a standalone but has minor spoilers for books one and two.

"A rock star, the girl from his past and a Disney princess. Find out what happens when bassist Liam is ‘unplugged’ from Blue Phoenix."

Blue Phoenix bass player, Liam Oliver discovers pictures of his fiancée with another man and his world crashes around him. He packs up his humiliation and hurt and flies back to his Welsh family home for Christmas.

Cerys Edwards once had pictures of Liam Oliver covering her bedroom wall. Her best friend’s big brother never gave her the time of day when they were growing up. When she was fifteen, he left town leaving Cerys with her fantasies. Now he’s back. The problem is, she has a daughter and a broken relationship of her own.

In the world of his Christmas past, Cerys and Liam reconnect. Are they two hurt people looking for comfort in a time of heartbreak or does Cerys have a place in Liam’s future too?

Months later and unplugged from his Blue Phoenix lifestyle, Liam reconnects with Cerys. He discovers Cerys’s world is full of complications he never expected – including Ella’s father who isn’t happy about being replaced by a rock star.

Unplugged is more than a rock star romance. Liam isn’t dark and brooding like Dylan, or a messed up bad boy like Jem, but a fiercely loyal man with a big heart. This is a story of love, family and unexpected bonds made that can’t be broken.

1. Liam’s bassist hero and inspiration is Flea from Red Hot Chili Peppers and I think this song sums up how he feels when he’s in California watching his life fall apart and all he wants is to see Cerys again.

“The secret I’ve kept locked in my heart since Christmas can’t stay hidden. Cerys touched me in ways Honey never did and there has to be a reason why. If we’d really just been two hurt people looking for comfort, the need to see her wouldn’t have obsessed my thoughts for the last two weeks.”

2. Cerys isn’t the only girl who steals Liam’s heart in this book. He builds a snowman with Cerys’s daughter, Ella, although he’s not keen on the song.

“I like you,” says Ella as she watches Liam place the head on the snowman’s body.
“Why, thank you, little lady,” he says in a false American drawl.
Ella suddenly hugs Liam around the leg and he looks down in surprise before glancing at me. Now he’s out of his depth as his arms hover over whether to hug the girl back or not.  ~ Cerys in Unplugged

Do You Want to Build a Snowman
www.youtube.com/watch?v=V-zXT5bIBM0

3. This is the book where we first hear Jem’s real name too and more of a hint about Bryn’s weird sense of humour

“How’s Jeremy?” I can’t believe she still calls him this. Jem hasn’t been Jeremy since he was in primary school, apart from if we want to annoy him. If Bryn really wants to piss Jem off, he sings him the Pearl Jam track of the same name. ~ Liam in Unplugged

4. This is also the first book where Ruby Riot feature, as Liam takes Cerys on a date to one of their local gigs. Ruby makes quite an entrance.

I’m interrupted by a girl arriving in the bar. ‘Arriving’ is a mild way of putting the entrance of the tall, skinny girl. She crashes through a side door and stomps in motorcycle boots across the room. Dressed in a short black dress barely covering any of her long legs, the girl's hair shines scarlet red as it catches the light of the bar. ~ Cerys in Unplugged

5. Cerys is a long-time friend of Liam’s sister and four years younger than him. When she hung out with his siter, Louise, they used to listen to Blue Phoenix rehearse.

“Blue Phoenix rehearsed at Liam’s house. I got subjected to their early stuff and believe me, it wasn’t good.”
“I don’t believe that! They’re an amazing band.”
“Once they started playing their own stuff, it improved. Marginally. When you’ve heard ‘Stairway to Heaven’ rehearsed on repeat for two hours, it doesn’t sound so good anymore.”
~ Cerys in Unplugged

6. Well, there has to be a rock ballad…. I think this could be the song playing in the final scene of the book too (no spoilers!)

“Every time you listen to my heart, I want you to remember one thing. Until the day my heart stops, it belongs to and beats for you – always remember that.”
Cerys burrows further into me, pressing her face harder against my chest as if burrowing further into my heart and soul. She doesn’t need to. She’s there, always.

I Don’t Want To Miss A Thing ~ Aerosmith

Full Playlist for the Books

Posted by Dawn Hartzburg at 8:30 AM